NOTE: THE GRAY ANTHRAX SCARF PATTERN, LIKE THE GRAY TIE, IS SLIGHTLY DIFFERENT FROM THE OTHER ANTHRAX ITEMS. IT HAS FEWER "BUGS."

This design, quoting People Magazine, is truly Germ Wearfare. Patterned after the micrograph of the spore-forming Bacillus anthracis bacteria, and laced between biohazard warnings, Anthrax on silk makes a powerful statement! Anthrax is a highly lethal disease capable of causing shock and death in 24 36 hours. An effective vaccine has limited the danger to its primary target, farm animals. However, due to its airborne mode of transmission, it looms as a significant biological warfare threat. 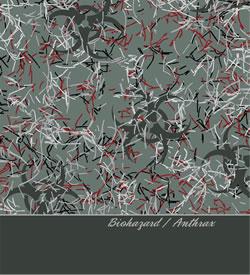