Welcome to the IA pathogenic picnic! Chances are, you’ve made the acquaintance of one or more of these intestinal interlopers, especially if you like your burgers rare, your sushi aged and your venues, suspect. For the first time, on any stage, we’ve invited Six of the most common suspects to show their stuff, creating a veritable rogue’s gallery on silk. We figure it’s better they be on your tie, than on your fork! Here are a few sobering amuse bouches:

Campylobacter: considered the most common bacterial cause of foodborne illness. Primarily from poultry, estimated to cause over 2 million infections annually in the U.S.

Norwalk virus: arguably the most common viral cause of foodborne illness, gets most headlines when lurking in hotels and cruise ships.

E. coli: a common, usually harmless intestinal bacteria, until it morphs into 0157:H7 producing a powerful and potentially lethal toxin. Most infections come from contaminated meat, especially beef, in the form of undercooked ground beef. The bacteria are often spread among the great “unwashed,” i.e. from poor handwashing or hygiene habits.

Listeria: not as well-known as Sal and E., but usually more deadly, with infections leading to blood poisoning or meningitis. Mainly a problem with ready-to-eat foods

Shigella: one of the most frequent causes of GI disease in people, nearly 500,000 cases annually in the U.S. Typically originates from food or water contaminated with human or animal waste. Passes easily between people – nursing homes and day-care centers are places where frequent outbreaks occur. 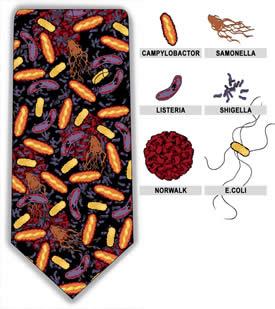