With Norgen’s RNA/Protein Purification Kit, the purification is based on spin column chromatography using Norgen’s proprietary resin as the separation matrix. Norgen’s resin binds nucleic acids in a manner that depends on ionic concentrations, thus the RNA will bind to the column while the proteins are removed in the flowthrough. After the RNA is washed and eluted from the column, the column is then regenerated and used to purify the proteins that are present in the flowthrough. Norgen’s kit purifies all sizes of RNA, from large mRNA and ribosomal RNA down to microRNA (miRNA) and small interfering RNA (siRNA). The purified RNA is of the highest integrity, and can be used in a number of downstream applications. The purified proteins can also be used in a number of different downstream applications. 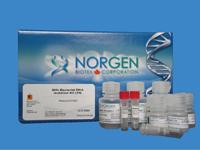