The S-4FB (N-succinimidyl-4-formylbenzamide) heterobifunctional crosslinker is fundamental to Solulink’s proprietary linker technology. S-4FB reacts with primary amines on proteins (amino group of lysine) or amino-modified oligonucleotides or surfaces, introducing a 4FB (4-formylbenzamide) linker that forms stable covalent conjugates with biomolecules possessing HyNic (6-hydrazinonicotinamide) incorporated linkers. 4FB groups incorporated on biomolecules and surfaces are extremely stable and have been known to maintain their reactivity for >18 months.

Solulink’s proprietary linker technology is based on the use of two complementary heterobifunctional linkers:

The result is two biomolecules conjugated through a UV-traceable and stable bond (bis-arylhydrazone) with measurable absorbance at 354 nm. Thus any two proteins, regardless of molecular weight, can be efficiently conjugated. 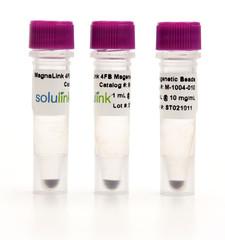