DNA or RNA damage is due to environmental factors and normal metabolic processes inside the cell, that then hinder the ability of the cell to carry out its functions. There are four main types of DNA due to endogenous cellular processes and they are oxidation, alkylation, hydrolysis and mismatch of the bases. During the oxidation of bases, highly reactive chemical entities collectively known as RONS, occurs. RONS stands for reactive oxygen and nitrogen species and includes nitric oxide, superoxide, hydroxyl radical, hydrogen peroxide and peroxynitrite. Numerous studies have shown that RONS causes a variety of issues including DNA damage (1).

8-hydroxyguanine, 8-hydroxy-2′-deoxyguanonsine and 8-hydroxyguanosine are all RNA and DNA markers of oxidative damage. 8-hydroxy-2′-guanosine is produced by reactive oxygen and nitrogen species including hydroxyl radical and peroxynitrite. Specifically its high biological relevance is due to its ability to induce G to T transversions, which is one of the most frequent somatic mutations (2). 8-hydroxy-guanine has been the most frequently studied type of DNA base damage, with studies in diabetes, and cancer. Base modifications of this type arise from radical-induced hydroxylation and cleavage reactions of the purine ring (3, 4). And finally, 8-hydroxy-guanosine, like 8-hydroxy-2′-guanosine, induces a mutagenic transversion of G to T in DNA. Its role has specifically been tested in the development of diabetes, hypertension and strokes (5-7).

DATA: Certified in Mouse and Human, other species not tested. For details on the species reactivities of the antibodies used, please see individual data sheets corresponding to the catalog numbers given on the kit components tab. 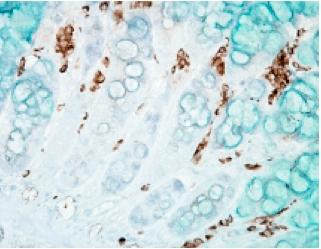